Due to being naturally produced from bees, honey is recommended as a superior nutritional option to sugar, with the help of the industry. However is that really the case? Is honey better than sugar? 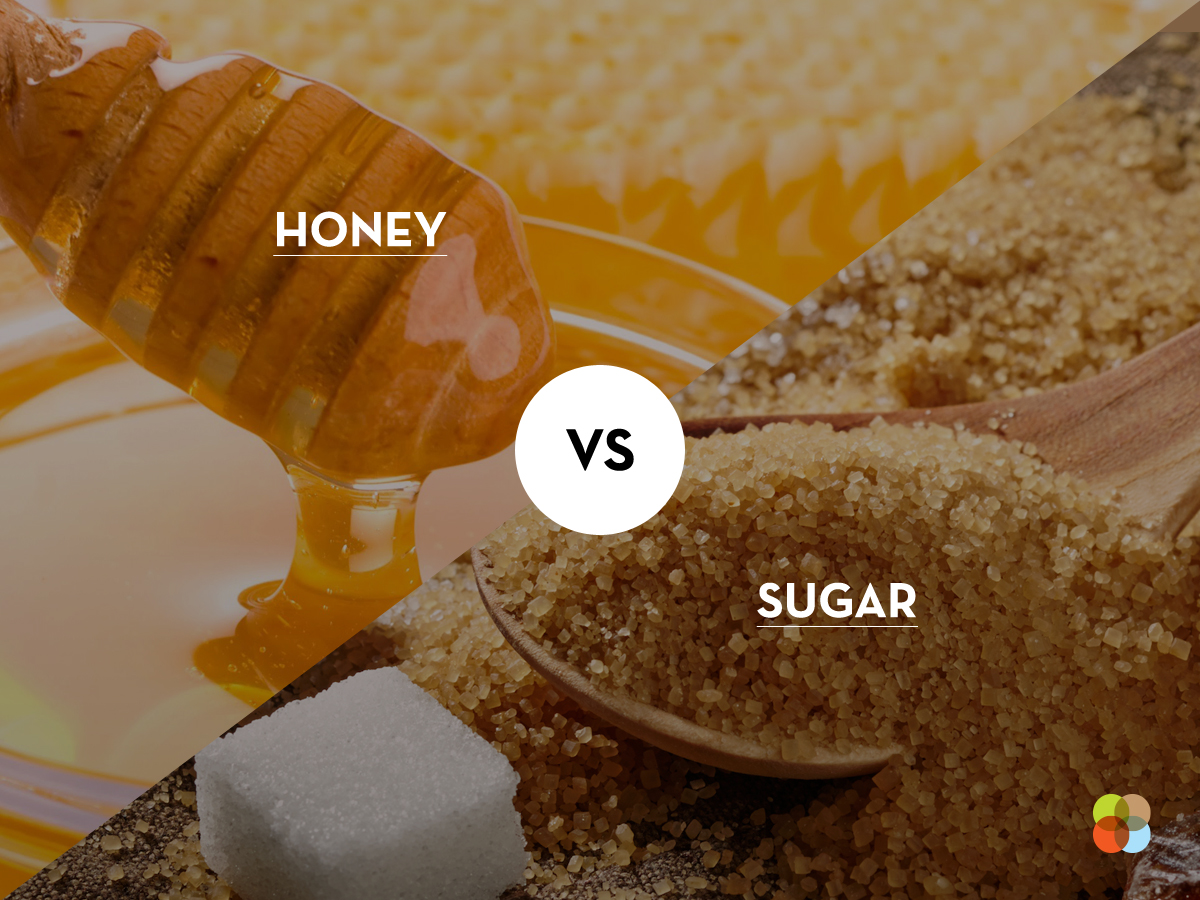 Here we’ll discuss in detail if the assertion above is true or not. And we’ll do so on three levels:

From the table we deduce that honey contains different kinds of sugars relative to sugar, but not so different quantities of them. Meaning honey contains fructose and glucose while sugar contains sucrose. Overall quantity of sugars does differ a bit, but if we take into account the way they’re served (teaspoon) this difference is significantly reduced.

In addition, it is often mentioned that honey has a superior concentration of antioxidants compared to sugar. Some antioxidants are the following: Vitamins A, C, E and b-carotene as well as the following: selenium, lycopene, lutein and flavonoids. Both sugar and honey contain minimal or zero amounts of those substances. In more detail, their content in vitamins A, E and beta-carotene is zero.

With regards to vitamin C honey contains 0.5 mg/ 100g whereas sugar 0 mg/ 100g.. However, this different is not significant if we consider that (1) 100 g is quite a big amount compared to 1-2 tsp that we consume and (2) that the Recommended Dietary Allowance for vitamin C is 90 mg and 75 mg per day for adult men and women respectively. Those who smoke should consume 35 mg/ day on top of that. As an example one orange contains approximately 65 mg vitamin C, 17 μg vitamin A, 0.27 mg vitamin E and 104 μg beta-carotene. As for the other antioxidants mentioned sugar and honey contain zero amounts of lycopene and lutein, 0.9 and 0.8 μg of selenium respectively and honey contains some flavonoids. 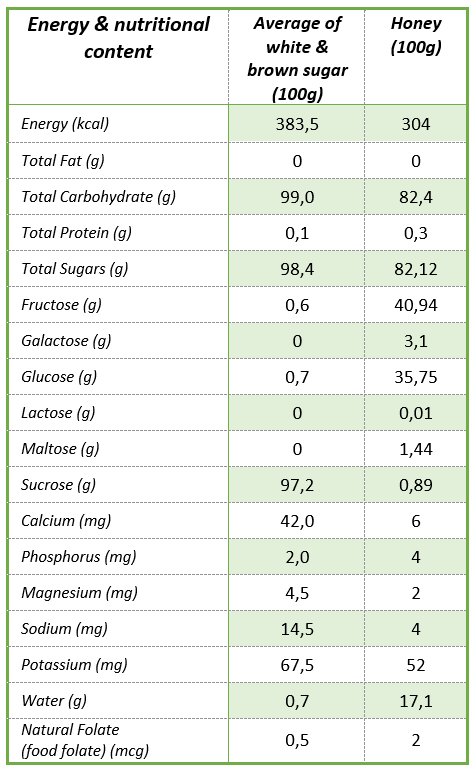 The glycemic index is a value assigned to a food, via a specific protocol, which informs us how quickly, after we’ve consumed that food, will blood glucose rise relative to a base/reference food. The latter is usually edible glucose, and food are usually classified in one of the following three categories:

By comparing sugar and honey’s indices based on the glycemic tables for foods published, and concern averages of different varieties of honey, we observe that honey has a slightly lower index than sugar (61 for honey versus 66 for sugar/sucrose) but the discrepancy is small.

If we examine data from more recent scientific reviews, studying different varieties of honey, we observe the following about the glycemic index:

Thus there are notable differences between the glycemic indices of distinctive varieties of honey, probably due to several factors like their concentration in sugars and other physical characteristics.

According to what we’ve seen above:

In a few words

Although honey is produced free of industry interventions, and therefore thought of as being superior to sugar nutritionally, this only holds under certain conditions. 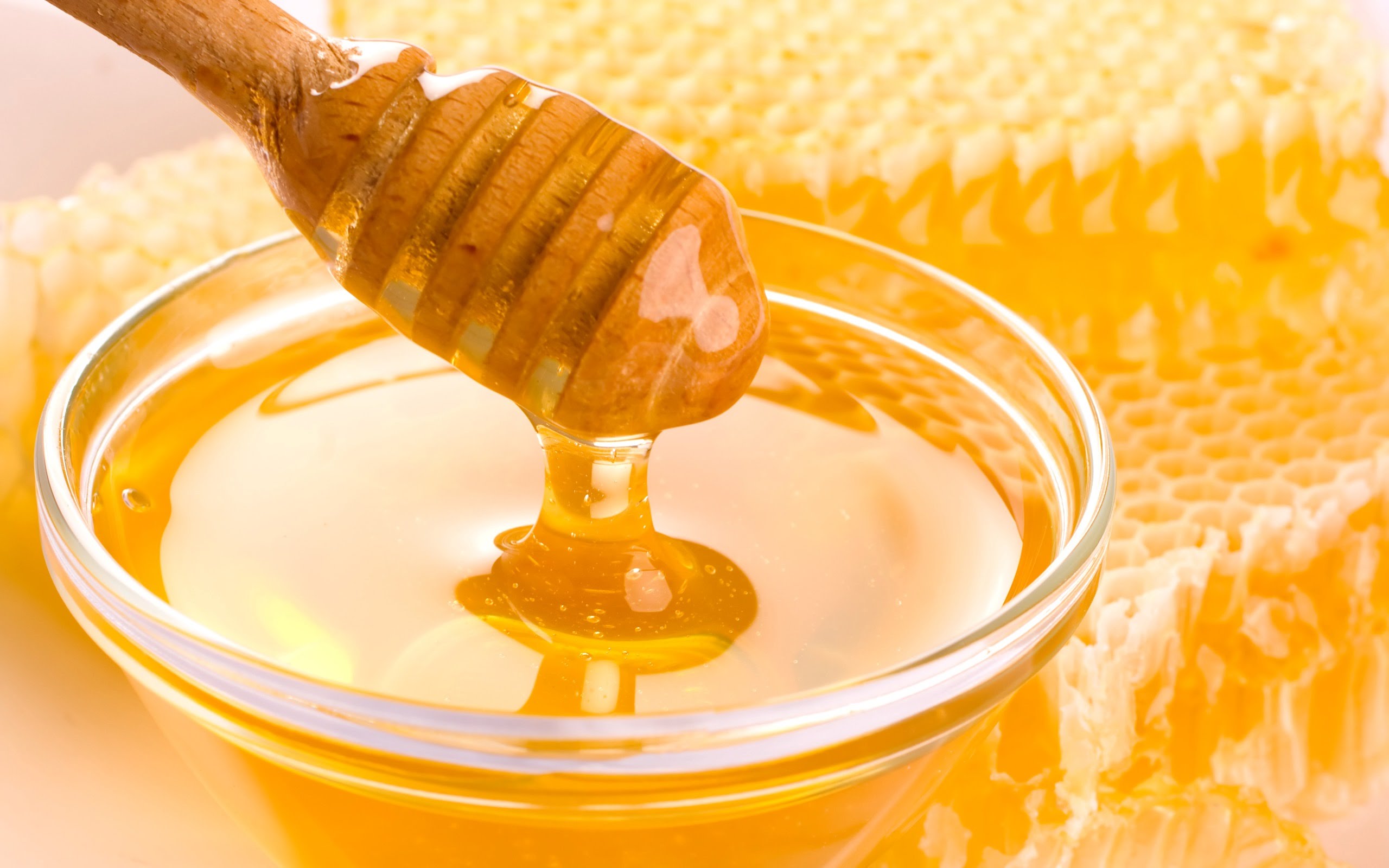