A Working Group comprising of 22 scientists from ten countries gathered in Lyon, France (at International Agency for Research on Cancer) to discuss the influence that the consumption of red meat and processed meat has on carcinogenicity. In order to do that the Group inspected more than 800 studies which examined the relation of cancer with eating red and processed meat.

Red meat is muscle meat from mammals, like beef, veal, pork, lamb, horse and goat, which is not processed. Processed meat is meat that has been salted or fermented or cured or smoked or underwent other process to enhance flavour or improve preservation. Red meat definitely has nutritional value as it contains protein and nutrients. However through cooking certain carcinogens may be formed, whereas through processing carcinogenic chemicals may develop. 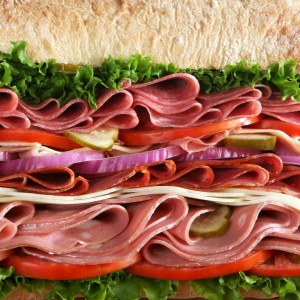 The Group concluded that there is enough evidence to support that eating processed meat is linked to carcinogenicity in humans. The same is not true for the consumption of red meat for which evidence was not as satisfactory.

The results were as follows: Consumption of processed meat was classified in Group 1 of carcinogenic mixtures, agents and exposures (IARC), which is “carcinogenic to humans”. In this case it was with respect to colorectal cancer. We should note that the classification reflects the reliability of the evidence and not the level of risk itself. On the other hand consumption of red meat was categorized as “probably carcinogenic to humans” (Group 2).

IARC Monographs on the evaluation of carcinogenic risks to humans